If you’d like to combat airborne viruses, remove odors and purify the air of pollutants in smaller rooms in your home, such as bathrooms, laundries and areas where pets live, then a plug-in air ionizer purifier is an effective option.

These mini air cleaning machines are inexpensive, energy-efficient and highly compact. They take up very little space as they plug directly into a power socket, phone charging adapter or USB port.

Some, such as this powerful little one I have, still work when not plugged in and can scrub the air of persistent odors in places like shoe closets, musty cupboards, and even inside smelly fridges.

That’s some of the benefits of plug-in air purifiers. There are also limitations to be aware of though, as well as some important warnings and even dangers for asthmatics and people with breathing difficulties.

Ahead are the best plug-in air ionizers, mini ozone deodorizers for bad smells, and small USB purifiers with HEPA filters on the market in 2020.

This is misleading to readers and, in the case of ozone machines, potentially dangerous for asthma sufferers and those with lung problems or in poor physical health. While O3 generation can be effective at destroying airborne viruses, bacteria, mold and particularly odors, it is also harmful to your lungs in high concentrations.

The EPA recommends ozone levels not exceed 0.05 parts per million in the air you breathe. They also say that people with allergies, asthma or respiratory problems should avoid it completely.

Manufacturers usually state that they are within the safe limit, yet testing is lax, recalls are common and you really shouldn’t be breathing in O3 for too long if you value your health.

A far safer option is to buy one of the true plug-in air purifier ionizers ahead. Negative ion generation is a much more elegant and beneficial method of air cleaning than oxidizing O3 gas.

Alternatively, consider one of these desktop air filters or these best small and portable air cleaners. While not true ‘pluggable air purifiers’, they are still light and compact and highly effective at filtering the air of pollutants.

If you’d like to use healthy negative ions to purify the air around you of floating viruses, bacteria, smoke, volatile organic compounds, mold spores, dust mite waste products and other floating allergens, then the new ionMi ion generator is a great choice.

This little corona discharge ionic machine generates an impressive 20 million negatively charged ions per second. That’s 10 times more than most competitors and you can read about the many benefits of negative ions here.

Rather than being powered from an electrical wall socket, this mini air ionizer plugs directly into any USB point for charging.

That means you can use it plugged into a laptop or computer, phone charging point or in a car with a USB adapter. You can even use it on an airplane to protect you from airborne viruses if your seat has a USB outlet, as most do nowadays. The ionMi works without being plugged in as well. It will last for 14 hours on regular output and at least 3 days in power saving mode, according to IonPacific. This makes it a great ionizer to take traveling.

This plug-in air cleaner is also useful in the workplace. Slot it into your PC’s USB port to clean the air while you work and combat tiring positive ion pollution from electrical equipment.

Or, once charged, just have it sitting nearby you on your work desk or on a coffee table while you watch TV in the evening.

Some customer reviewers even recommend wearing it around your neck, though these personal air purifiers, or these negative ion necklaces, are more suitable for this purpose.

This little USB ionizing machine is only 3.9 × 4.3 inches and weighs just 5.6 ounces, making it tiny enough to fit in the palm of your hand and highly portable.

You can see the new ionMi from IonPacific at a very affordable price here. It’s the best plug-in air purifier currently on the market in 2020.

The recently released Clarifion negative ion generator (also known as the Air Soap) plugs into any power socket and generates 10 million ions per second into the surrounding environment.

While not as high ionic output as the ionMi, the plug-in Air Soap is even cheaper and has special discounts for multipacks like this on Amazon so you can ionize the air in several rooms on a budget. This space saving outlet air purifier is particularly useful for areas like bathrooms, in your kitchen or laundry, near smelly shoes and sports equipment, and in rooms where pets sleep and do their business.

You can keep the Clarifion Air Soap running 24/7 to clean the air of odors and allergens with minimal power usage. Just plug it into any electrical socket and leave it for constant air purification day and night.

There are currently no small HEPA filter-based air purifiers that plug directly into a wall socket without a power cord on the market.

This design would also be ineffective as HEPA technology requires airflow and should be positioned away from walls.

There are, however, some good USB powered air purifiers that are almost as small. They are also much more powerful than old UV-C light air sanitizers, like the Gideon Mini or Germ Guardian Pluggable.

One of the smallest of these HEPA based USB purifiers is the QUEENTY air filter you can see here with customer feedback and home pictures.

Despite its miniature size, it has 3 stage filtration with prefilter, True HEPA and activated carbon filter for odors and chemical gases like VOCs.

The manufacturers say it removes 99.97% of pollen, pet dander, dust and smoke and filters out particles as low as 0.3 microns, including PM 2.5 pollution.

Realistically though, a plug-in USB air purifier this small would have a limited air cleaning range and should be positioned close to you for best results. The mini-tower design of the QUEENTY makes this easy to do and you can plug it into any USB port, such as on your laptop, phone charger or with any adapter.

As well as the True HEPA and carbon filters, the QUEENTY also works as an ion generator, producing 3 million ions pcs/cm3. Not as high as the ionMi or Air Soap but still an extra level of purification in a surprisingly versatile little HEPA filter.

It also comes with 2 fan speeds, oscillating mode, a USB cable included and a 30-day money-back guarantee, according to the manufacturers.

You can see the QUEENTY USB air purifier with HEPA filter here on Amazon at a great price for so much technology. With hundreds of positive customer reviews, this model is clearly a popular choice.

If you are looking to purify the air in a larger room and space isn’t an issue then consider one of these best ionic air purifiers instead.

As stated earlier in this review, I don’t recommend using ozone generating machines for long periods while in a room as they can be dangerous, especially for asthmatics and allergy sufferers.

That said, ozone deodorizers, also known as air scrubbers and sanitizers, can be useful in spaces with bad odors where you spend little time, like moldy closets, smelly bathrooms and pet areas with difficult to remove odors.

They can also help clear away the lingering smell of marijuana or cigarette smoke, chemical odors from paint or cleaning products, and mustiness from water damaged furnishings or carpet.

It’s best to leave the room and keep them running for only an hour at a time at most. Keep in mind that dogs and cats are sensitive to O3 too and this reactive gas can build up in enclosed spaces.

Fortunately, the best plug-in ozone generators, like this little bestseller, have timers so you can set them for say half an hour and, after freshening up the air, they will turn off automatically.

The Airthereal B50-Pro Ionic Odor Eliminator model above also generates healthy anions for increased air scrubbing power and has many extra functions. Its set and forget timer would make it a great toilet air purifier or kitchen air cleaner.

If you’re looking for a cheaper option and don’t mind remembering to turn it off, the even smaller O3 sanitizer from the same respected brand is excellent value and has very positive customer feedback.

I also considered other popular wall socket ozone machines, like the GT50, Edenpure Oxileaf and Breathe Green Plug N’ Pure, but can’t see why you wouldn’t choose either of the superior Airthereal models over these brands.

Small negative ion generators can remove floating viruses from the air. However, they will not help if someone sneezes or coughs directly on you or with viral contamination on surfaces.

Are there any disadvantages of using direct plug-in air purifiers?

Where is the best place to use a plug-in purifier?

These mini air cleaners are designed for smaller bedrooms and compact spaces like the bathroom, laundry, study and pet areas. 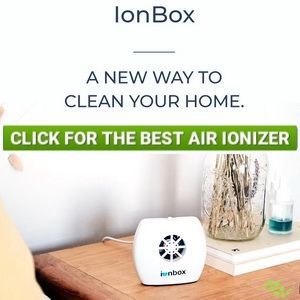 A Cheap Solution for Bad Odors and Pollutants in Smaller Spaces

I hope this list of best plug-in air purifiers, USB ionizers and wall socket ozone deodorizers has been helpful.

The right one can quickly get rid of bad smells and clean the air in the more odorous parts of your home, like toilets, bathrooms, laundries, shoe closets and pet areas.

They don’t have to cost that much either as most of the recommended products here are quiet cheap for the air cleaning power they offer.

Personally, I’d choose the new plug-in ionMi, available here with free delivery, for it’s superior ion generation, easy portability, and the way you can use it anywhere once charged.

You can even have it working in your car while driving or take it on public transport or a plane when traveling for better air.

There are several other specialized car air purifiers here and you can also see even more powerful negative ion generators here for cleaning the air in your home.

This article may contain affiliate links to products I've researched and recommend. As an Amazon Associate I may earn from qualifying purchases at no cost to the consumer.
←Previous post Next post→
Click Here to Leave a Comment Below 0 comments